Filed under: Uncategorized — hannahoakland @ 11:51 am

I went to a meeting last night. I probably shouldn’t have gone.

Don’t get me wrong, I was totally invited. It was useful, and the people were lovely, and I genuinely do want to help create a more joined-up community.

But in all honesty, I should have been at home in bed. Or curled up on the sofa. Or anywhere that it’s acceptable to be hidden under a blanket in your pyjamas. Because I’m tired.

The problem is that, right now, I’m often tired. It’s a comes-on-suddenly-and-I-just-need-to-sleep-or-I’ll-bite-someone’s-head-off-or-sob-for-hours kind of tired. Which is really, really annoying. For everyone.

Nine times out of ten it can be sorted right out with a nap. But still. It’s annoying.

It’s more than seven months now since I stopped taking my antidepressants. Slowly but surely, I’ve been creeping back into the real world. Feeling all the feelings again. Taking on new projects. Breathing more evenly. Re-learning what it’s like to live inside my skin.

Not so much re-learning, actually. More like just learning. For the first time. How to actually be myself. Eccentricities, sensitivity, overemotional tendencies and all. It’s been a bumpy old road. Equal parts potholes and tarmac. There have been several occasions when I’ve almost gone back to the tablets.

But recently the road has started smoothing out. I’m getting better at spotting the early warning signs. I’ve been a lot more pro-active. Spent a lot more evenings reading, or talking, or wrestling with ludicrously complicated jigsaw puzzles. And a lot fewer hours mindlessly watching tv and numbing out the world.

There are probably four or five good days out of seven. Which is progress on an epic scale. Four or five days when I feel like I can face the world before lunchtime. Days when I can be productive. Leave the house. Enjoy the children. This morning I made a joke. At 8am. Needless to say, Wes was stunned. I don’t think either of us can remember the last time that happened.

And yet. The tired. The soul-destroying, joy-zapping tired. That means I pay through the nose every time I step outside my comfort zone. Every time I push myself. Every time I dare to try to achieve something.

Sunday was Valentines Day. Which we celebrated in a fairly non-traditional way. Wes went to work, and I took the kids into town. For an eye test. Obviously. Nothing says love like a five year old trying on some comedy plastic glasses and an assortment of lenses. Which she has absolutely no need for, but if Topsy and Tim went to the optometrists, then there’s no way she’s getting left out. Ah, telly.

Afterwards, we had lunch with all the cool kids. At the Debenhams cafe. Sandwiches, chocolate milk, colouring sheets. And only one occasion when Joel tried to climb over the back of the booth to join someone else’s family. Success. 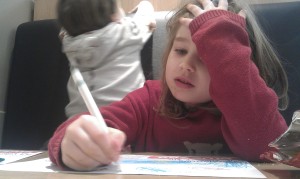 We even made it to church. The children refused for the most part to join in with the service, and ‘escaped’ from their kids groups to hide under the table, but they cooed over lots of tiny babies, got to hang out with their godparents and were eventually tempted back into constructive activities by the prospect of icing biscuits. And, in Elvie’s case at least, her clothes.

The point is, we did it. We did six hours, out of the house. Without falling out. Or shouting. Without me losing my mind. Or a child. We even made it through the moment when their endless faffing meant that we missed the last useful bus and had to walk home. Rather than wait thirty minutes in barely-over-zero temperatures. It went off without a hitch. Apart from the point when Joel very nearly pooed on the pavement. That would have been bad.

We got home, I made dinner. Wes was back. We chatted. About how proud I was of our day. About how it couldn’t have happened six months ago without me having a nervous breakdown. About how much stronger I’m getting.

And then. Yesterday morning I was shattered, grumpy and back in my bed for a nap before midday. Just about managing to be up and dressed and showered in time to make dinner and go to my 7 o’clock meeting.

I hate it. I absolutely hate it.

I hate knowing that I’m not quite as better as I think. I hate the physical reminders of the battle that my head is still fighting. I hate that the model of womanhood I’m showing Elvie is one that just needs to rest. Last week she told Wes that “girls can’t be strong,” and it breaks my heart to think that might have come from me.

At least I manage to sleep through Cbeebies most afternoons. Every cloud, and all that.

There’s a popular theory amongst sufferers of invisible illnesses. It’s called the Spoon Theory*, and it equates energy with, well, spoons. Bear with me.

Most people have an almost unlimited supply of spoons to use throughout the day. So they go about their business without really considering how much energy they’re using. Because they know they’ll have enough. And, if they really push themselves and run low, they can re-stock overnight.

For others of us, it’s not so simple. When your spoons are scarcer, you have to be much more careful where you use them. Some days you can use half your quota just by getting up and making breakfast. Which doesn’t leave much for the rest of the day.

My problem at the moment is that I can’t predict how many spoons I’ll have on any given day. Sometimes there are spares. And sometimes I use up three days worth in one afternoon of Valentine’s madness, and wonder why I’m struggling to leave the sofa the morning after.

It sucks. Mostly because I then find myself at meetings I shouldn’t be going to. Using up whatever little rusty teaspoons I can find at the back of the cupboard. Because it just feels lazy to say, “I can’t make it tonight, I’m too tired.”

I know. I know that ‘being tired’ is a lame excuse. I know that people use it all the time. That it makes us roll our eyes. And question their motives. And call them names like ‘flaky’ and ‘lightweight’. I know. I do it too.

Let’s decide that there’s no shame in admitting that we’re just too tired. Let’s decide that looking after ourselves is more important than turning up to everything. That helping ourselves to recover, or stay better, or not get sick in the first place, is worth more than a full diary or a supremely Instagrammable social life. That success, and strength, and achievement can come from inside, as well as out.

Maybe then we’ll all have the energy to be a little kinder to ourselves. And each other.

I won’t be going out tonight. Not even slightly. I’m planning to put my pyjamas on as soon as the kids are in bed. Maybe even earlier. I’m wild like that.

And I will spend the evening curled up by the fire. Counting my spoons.

Who knows, this time next year, I might have a drawer full.

(*You can find the original explanation at http://www.butyoudontlooksick.com – it makes a whole heap more sense than mine.)