Last night I had a dream.

The vivid kind. The kind that stays with you when you wake up, hangs around for the rest of the day, and then sneaks into your thoughts at regular intervals for years afterwards until eventually you wind up getting it confused with your actual memories.

My usual kind of dream, then.

I was running round a seaside bed and breakfast, decorated predominantly in varying shades of blue, and populated by the entirety of my extended family. Trying to simultaneously avoid the flirtations of the only mildly-attractive chef, find an unoccupied shower and grab some breakfast for my little brother. Who turned out, on closer inspection, to actually be Joel.

Until I reached the bottom of my parents stairs, that had magically appeared in the tastefully blue-painted hallway. At which point I stopped. Because I had to. Because I knew, all of a sudden, that I was about to give birth.

Which I did. It’s probably a good job that Wes is away this week, because the whole thing felt very real. I’m pretty sure that, if he had been here, I’d have woken him up. I felt it all. Physically. To the point that I had to double check in the morning that there wasn’t actually a chubby, screaming baby boy underneath the duvet.

On reflection, I could probably have worked that out for myself.

January’s an obvious time for new starts.  Everybody’s at it. New Year, New You. Apparently. Here at Team Oakland, we’re no exception. 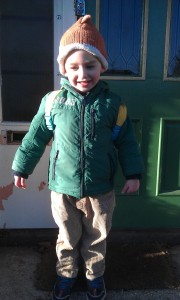 Look at this boy.

He had his first session at nursery this morning. And he was amazing. Straight in, bombing off after a tray of plastic dinosaurs. When I came to collect him, he was mostly just upset that he hadn’t had time to ride all the bikes. By 2pm he was moping by the window, staring out at the playground, “Mummy, I miss nursery.”

Fingers crossed, this is the start of something beautiful. That cup of tea that I drank this morning, by myself, in perfect glorious peace, certainly felt like magic.

Other things are changing too. The book is steaming into view, only a few short months away from being released. The perinatal support group that we’ve been planning for what feels like forever will start at the end of next week.

And, as of Sunday, I’ve been medication-free for six months.

We’ve fought hard for every single one of them. Each month. Each week. Each day, most of the time.

That’s a whole other post that needs to be written. I’ll write it later. Maybe at the weekend. Maybe one morning next week when I’m at home, by myself, relishing the silence that only nursery can bring.

In the meantime, I’ll be toasting the change. That rare, precious moment when it feels as though everything is coming together at once. When the hard, unending, desperate slog of months on end actually starts to make a difference.

When the stars align. And the clouds lift.

And you can feel it shifting.

Even in your dreams.

2 Responses to “All change.”