Filed under: Uncategorized — hannahoakland @ 10:35 am

I suspect I’m not alone in that. It’s pretty special. And full of memories.

That’s where my parents were, celebrating their twenty-fifth wedding anniversary, on the day I met Wes. And where he was, a few weeks later, providing his family with endless hours of amusement whilst he hunted for exactly the right gift to bring back for his new girlfriend. (Sparkly earrings and a French dance magazine, if you’re interested. Totally worth the search.)

It’s where we went a few months later. For the day. On our way to a French holiday with friends. Walking the entire city with a week’s worth of luggage on our backs. Marvelling at how tiny the Mona Lisa really is. Watching the sun set from the top of the Eiffel tower. Eating pizza in the train station whilst I tried to use my schoolgirl French to buy us the right tickets.

And, a week later, for an unexpected overnight stay after a fire in the Eurotunnel meant that our train was cancelled. Despite our desperate use of the Metro, and our stilted attempts at purchasing tickets on already-filled buses and ferries, there was no way to get home. And so we stayed.

We missed the friend’s wedding we were returning for, and instead we wandered Paris at night. People watching. Taking photographs. Eating candyfloss in the shadow of the Moulin Rouge. 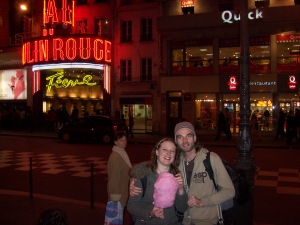 It was magic. It still is. Except that, this morning, it’s broken.

At least 128 people are dead. With so many critically injured that by the end of the day that number will surely have risen. Multiple attacks. Multiple gunmen. Innocent people.

Co-ordinated terror on an epic scale.

I remember the day the twin towers fell. I remember my Aunty calling us, telling us to switch the tv on. I remember watching in disbelief. And watching again, repeatedly, as the same terrifying images were repeated over and over. And later that day, at work in an old people’s home, escorting two sweet elderly sisters from the television lounge to their room at the other end of the corridor. By which time they had forgotten everything that they had just seen.

Sometimes I wish I was more like them. That innocence. That just-in-the-moment life. That Dory-esque capability for forgetting.

But I’m not. Very few of us are. Most of us remember.

Which means that somehow, we have to find a way to deal with the unimaginable. The fear. The pain. The hurt. And the questions. From the media. From our children. From ourselves.

The what-do-we-do-now? that always follows these tragedies. The outrage and the political one-upmanship. The shouting over who can cause the most damage in retaliation. The defiance and the resilience and the quite frankly unbelievable bravery of the citizens of Paris as they carry on regardless.

I was in London on the 7th July. 10 years ago. Walking to work and wondering how there could be a thunderstorm without any rain. Getting to work and learning that a bus blowing up half-a-mile away sounds a lot like thunder. Sitting at my desk, listening to sirens. All day. Calling my mum to let her know that I was safe. Fielding calls from co-workers loved ones, checking that they had made it in to work alive.

Those next few weeks were hard. I avoided buses. Tubes. Anyone with a backpack. I jumped out of my skin whenever a car backfired or a garage door slammed. Ten years later and I still hold my breath after the first peal of thunder. Waiting for the lightning to prove that it is, after all, just a storm.

But we survived. We made it. We were lucky. We drank hastily assembled cocktails on our front step to celebrate being alive, using furniture we’d foraged from the streets of the estate. And we invited colleagues who had become our friends during those frightened conversations at our desks. We raised our glasses. We cried. We laughed. We watched ludicrous comedies so that we could stop the thoughts racing through our brains. And we carried on.

I don’t know much about global terrorism. I don’t pretend to understand radicalisation, the thinking behind the so-called Islamic State, or the motivation of the people who take part in these awful, despicable acts.

All I know is that ultimately, people are good. That there will always be helpers. That there already are. That this morning has seen queues of people waiting to donate blood in Parisian hospitals. That, to quote a much-used and deeply-treasured phrase, love wins. It has to.

I suspect that love will be the answer. The kind of love that shows our children that all people are equal. Regardless of their colour, their religion, their gender, their political beliefs or their sexual orientation. Love that holds the hands of our Muslim friends and embraces them, instead of viewing them all as killers-in-waiting. Love that trusts, and dares, and makes it perfectly clear that we are all in this together. Whoever we are.

Imagine a world where all our children are so loved and known and accepted that hatred is a concept they simply can’t grasp. Imagine how hard it would be to recruit terrorists in a world like that.

Love wins. It will. It has to.

We love you Paris.