A lot can happen in nine months. Trust me, I know – I have the children to prove it.

It’s been nine months since I blogged. This time there’s no baby to show for it. But there is a book. Or there will be, soon. When the editors and copy-editors and sales people and designers and printers and everyone else has finished tinkering with it. April next year, that’s the plan. We’ll have a party. Maybe even some ice cream. Or cake. Or both.

You’re all invited – put it in your diary – in pencil. I may not know much about the publishing industry but I’m learning fast that nothing’s set in stone until you can hold it in your hands. Maybe not even then.

52,000 words. That was always going to take a while. And there have been plenty of other distractions. Spectacular trolling that shot my confidence and my self-esteem to pieces. Family illness. A very-far-from-welcome diagnosis of gluten and dairy intolerance. Weaning myself off my anti-depressants. Potty training. Sickness bugs. Jobs that never materialised. School summer holidays. A new nephew. A new car. An allotment. Cooking. Cleaning. Laundry. Life. In general.

It’s been a long nine months. Tricky. It’s taken a lot of effort, and tea, and mild-to-moderate emotional breakdowns to get us this far. But always, throughout it all. I’ve been waiting. Waiting for the Next Big Thing. The one that would change it all. Perhaps I’ve always been waiting. Turns out it’s harder than it looks.

Signing the book deal was going to change my life. Make me successful, happy, fulfilled. Except that actually, I’m still the same. Now I’m making sneaky early-doors plans for a second book, safe in the slightly disappointing knowledge that I’ll be exactly the same person when it’s finished.

The allotment was going to revolutionise my mental health. And my exercise regime. Until I realised that I was spending ninety per cent of my time dragging Joel out of other people’s vegetable patches. Or their cars. So we put ourselves back on the waiting list and handed our little clutch of onions over to someone else.

Being gluten and dairy intolerant was going to kick-start a healthy-eating revolution. Give it a month or two and I’d be one of those internet gurus – eating nothing but kale and doing yoga in my sleep. Until I discovered gluten-free cake, and dairy-free ice cream. And ‘free-from’ pasta. Scuppered.

Coming off my tablets surely means that I’m Better. Completely. Ready to take on the world. Except that I’m not. Not really. I’m just better. With a small b. And I’ve learnt the hard way over the summer that I need to build some serious self-care into my schedule unless I want a full-on nervous breakdown.

I had a plan. This month was going to be the beginning of my big beautiful new life. I’d applied for the perfect job, had a couple of days of exciting freelance work lined up, and was totally ready for the start of term. Or, more accurately, the peace I’d get when Elvie was finally back at school.

I didn’t get the job. Not even an interview. One of my freelance days got cancelled, and I had to give the other away when our childcare fell through. And then, four days into term, we all came down with a vomiting bug of doom which left me curled up on the bathroom floor in crampy horrible tears, wishing that I was dead.

All within the space of a week.

There has been a lot of sobbing this week. A lot of anger. Sheer fury at the injustice of it all. At my glorious, best-laid plans that got so thoroughly, unceremoniously squashed.

I’m not so angry anymore. I’m just tired. Tired of always hanging on, feeling like an idiot, waiting for the Next. Big. Thing. to drop from the sky and change my life. In all honesty, I’m not sure it even exists. Don’t tell Joel. 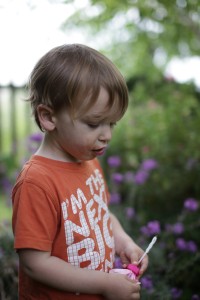 If only I had that confidence. Or maybe just that t-shirt.

This month has been a new start after all. Just not the way I planned. There’s no stellar career progression. No peace and quiet. No break from the mundane. And absolutely no rest for the washing machine.

But, *deep breath*, I think it’s going to be ok. I’m adopting a new approach. And, hopefully, immersing myself in the little things. I’ll be blogging more. Sleeping earlier. Writing notes for the new book. Making sure we get some proper, quality family time. Going slowly. Starting from scratch. I might even paint my nails.

I’m hoping that the Big Things are over-rated. I think they are.

They’re definitely too heavy to haul around all day.

I’m letting go. For now. Or trying to, at least.

Feel free to remind me.

6 Responses to “The Next Big Thing.”