Everyone is writing about courage at the moment. Maybe it’s the fallout from the inevitable half-term trauma. Or perhaps it’s the fact that the temperature dropped twenty degrees overnight and we’re all aware that it’s going to be a long cold winter. Whatever the reason, it’s got me thinking.

(Incidentally, of all the recent courage-related writings, my absolute favourite is Glennon’s description of the day she met Cheez-It-Haymitch-Window-Lady. Seriously, check out Momastery. I absolutely dare you to be the same person afterwards.)

We’ve had our fair share of courage recently. In the small things, admittedly. Courage, nonetheless.

On Wednesday Elvie was brave enough to sit in the ‘magic chair’ all by herself for her dental checkup. Without screaming, or crying. Or any drama at all. And she was brave enough to insist that the slightly-embarrassed dentist examine Purple Bear first, so that she knew exactly what that magic chair would entail.

Joel is getting more courageous by the day. Or crazier. One or the other. Either way he’s now brave enough to jump off tables, sofas and walls. Both feet first, always. And, occasionally he’s brave enough to look down, judge the distance and reach out for my hand to keep him safe. Personally, I prefer those times. I sweat a lot less.

I think about courage a lot. In terms of the children, and in terms of myself. There are plenty of opportunities to be brave in the long slow process of coming-to-terms-with-depression. Some days it feels like I deserve a medal for getting out of bed. Apparently that’s not an Olympic sport yet. I’m working on it.

I have, for the longest time, judged courage in terms of action. Being brave enough to say yes, or brave enough to say no. Sitting in the dentists chair, or reaching out a hand for help. Getting out of bed in the morning. Acts of wild and beautiful bravery, right there.

A few weeks ago I made one of the bravest decisions of my life. And, after hours of frantic writing, editing and rewriting, I sent off a book proposal to a publishing company. For this book. Based on this blog. Right here.

The moment of pressing ‘send’ was fifty per cent courage and fifty per cent blind optimism. I held my mug of tea until my hands stopped shaking, and congratulated myself on having fulfilled my bravery quota until early 2015 at least.

Somewhere in the midst of the email conversation with the editor that followed, and the endless delays to the publishers meeting date that are prolonging the agony of not-knowing-what’s-going-on I realised that big gestures and key moments are not the measure of courage. Not for me, anyway.

For me, the bravery is in the waiting. In the quiet and the dull and the mundane. The space between the big moments.

It takes less courage to submit a proposal than it does to tell your friends about it, and risk them knowing if it all goes wrong. As evidenced by how few of my own friends have been kept in the loop. I’ve used up all my bravery by not sending desperate ‘have-you-forgotten-about-me-please-love-me’ follow up emails to the editor. There’s not been much left for everyday life.

I’ve asked for a bracelet for christmas. One that I found on Twitter. One that just says ‘courage.’ It’s really cute. And it helps fund clean water projects, so it’s basically an entirely selfless choice… 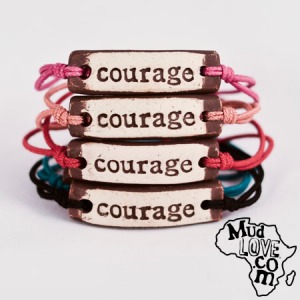 I won’t just wear it on the big days. The days when I host parties, or send life-changing emails, or go for medication reviews. I’ll wear it on all the days. Even the in-between days. When the bravery is in getting up, getting dressed and being honest with my friends. Or plaiting Elvie’s hair again. Or changing another nappy. Especially on those days.

Because most of the time, I can get through the big days on adrenaline. It’s the in-between days when I need courage. The everyday days. The waiting days.

Goodness knows there are plenty of them.

2 Responses to “Courage in the in-between.”