Eighteen months ago, I sat down at my computer and set up a blog. This blog. I agonised over it for hours…what to call it, which theme to use, how to link it to Facebook. Whether I was brave enough to write anything at all.

I decided that I was. Brave enough. And proved it by waiting six months before I wrote a single word.

That was a year ago. Near enough. Strictly speaking, it was a year ago last week but I’ve been collecting shells on a Cornish beach with my children, so this has had to wait. I’m ok with that.

Either way, my beautiful little corner of the internet is now a whole year old. It even had a ‘cake’. Thanks Wes. 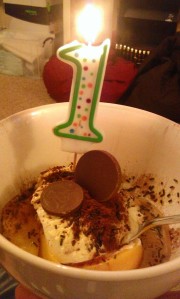 A year is a long time.

This year has been full-on. It’s been a year of owning up to depression. And starting medication. The year in which Elvie started nursery. And had her first case of nits. A year in which I learnt to grow vegetables. Conquered my fear of sewing machines. And decided never to go camping again.

It’s been the year when I realised that, in order to be anything remotely approaching sustainable, I need to go slower. Reflect more. Breathe more deeply. Spend more time outside. Watch less telly. She says, with Wimbledon mumbling away in the background. There’s room for improvement.

A year is a long time. And it feels significant. Especially for me.

I’ve always been one of the ok-I-know-how-this-works-now-I’m-bored types. I get tired of most things within a year or so. Itchy feet for new challenges. Greater possibilities. The longest I’ve ever stayed in one job was almost eighteen months.

Which goes some way to explaining why I find parenting so hard. Seriously. Elvie is nearly four already. That’s a lot of consecutive years.

I’ve suffered the same with my blog. Getting a bit bored. Losing the joy of it. Second guessing myself. Obsessing over stats and Twitter followers rather than writing anything half-decent.

I’ve been scared that nobody would read it. And then scared that everybody would. I’ve convinced myself countless times that I should stop. For a month. Or two. Maybe for good.

But I’m still here. Even after the twelve-month-mark-of-doom. Why? Good question.

The simple answer is this. When I write, I come alive.

I know who I am and what I’m about. It wouldn’t matter if nobody ever read a word of it. Amazingly, they do.

Here’s what I think. People read what I write because, somewhere deep inside, we recognise people who are doing what makes them alive. Really, truly Alive. And we’re drawn to them.

Being Alive is dangerous. It’s a vulnerable situation. Being your honest, open self. Throwing yourself into something. All in. Dispensing with the usual socially appropriate levels of cynicism and disinterest.

This year, it’s proved itself to be a risk worth taking. Being Alive has bought a whole new meaning to community. I’ve had the most amazing chats with the most incredible friends. I’ve had messages from people who have related to my posts or been inspired to deal with their own issues. I’ve laughed with people. I’ve cried with people. People I’ve known for years. People I’ve never met.

An unexpected bonus is that I’m starting to notice other people who are Alive. There are lots of them around.

This weekend we stayed at a Cornish B&B for my grandfather’s birthday party. Pendragon Country House. Seriously, stay there. All of you. Just make sure someone else is paying.

The house is beautiful. The garden is lovely. The food is stunning. Everything – jam, bread, pastries, three-course dinners – is home made. The welcome is phenomenal. There’s an actual suit of armour.

Within five minutes of arriving we felt totally at home. Despite the potentially perilous two-small-children-and-antique-china combination.

By the time we left, two days later, the owners felt like family. We swapped Cbeebies parodies and Gigglebiz impressions. There were hugs and kisses and thank you’s all round.

They were born for hospitality. For cherishing people. For spoiling them. For going above and beyond. For creating the possibility of an idyllic weekend, even with two small children in your luggage. They were Alive. And it made us feel amazing.

Being with people who are Alive rubs off on you. Howard Thurman sums it up better than I ever could.

For Nigel and Sharon, it’s hospitality that brings them to life. For me it’s writing.

For you, it might be accounting. Or gardening. Making music. Listening to people. Teaching. Painting. Whatever it is, do it. Please. Don’t be afraid.

You won’t regret it. I promise.

2 Responses to “Being Alive.”